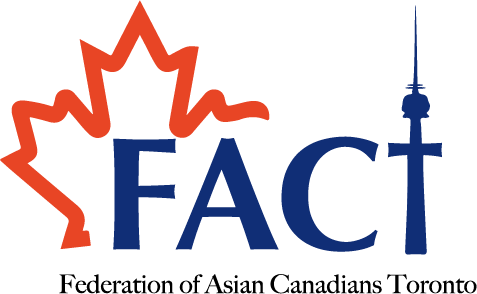 With multiculturalism being one of the core concepts that drives Canada’s identity as a nation, the Federation of Asian Canadians Toronto (FACT) is a registered non-profit organization that aims to build upon this ideology. One of the objectives of the organization, as Asian Canadians, is to help bring communities together by organizing social events & activities that allow for cultural exchange between individuals of diverse ethnic backgrounds. In doing so, we hope to promote mutual respect and foster harmonious relationships that will benefit all.

Benny is the President of Elegant Financial Inc., a life insurance MGA. She is also a registered mutual fund branch manager. She holds a premier financial planning designation, Chartered Life Underwriter (CLU®), managing over 50 agents and over 5000 clients providing the full range of financial services to help clients meet and achieve their financial goals, including but not limited to estate planning and preservation, wealth transfer, income protection, income replacement, family protection, debt consolidation and tax-efficient strategies.

For over 20 years, she has been an active volunteer working for the community. She is a founding member of the Toronto Elegant Lions Club and was the President of the association during its 9th term. She volunteered with Toronto Chinese Business Association for 14 years. During her tenure at the Toronto Chinese Business Association, she has held the position of Festival Chair 3 times for their signature event, the Toronto International Dragon Boat Race Festival. In addition, she was also the first board director to hold 3 consecutive terms as President within the association.

In late 2017, Benny founded the Federation of Transoceanic Chinese Canadian Association (FTCCA) with the intent to cultivate a harmonious relationship between Chinese Canadians by creating a platform for members to strengthen economic relations between Canada and China.

Nicole Leung is the General Manager and Vice President of Sales and Marketing at SmartRay Inc., a growing LED lighting company in Markham, Canada’s High-Tech Capital. She is instrumental in developing new customers and maintaining key accounts, she has taken on a leadership role in implementing sales and marketing strategy by increasing company sales dramatically, Oakville Hospital, Roy Thomson Hall and Hilton Hotel are some of her new clients. In June 2018, Nicole worked with
the City of Markham to facilitate a donation of 300 light bulbs to a northern indigenous community in Ontario to reduce their 6 times high electricity cost.

Aside from her day-to-day operation, Nicole is the Special Assistant to the Honourary Consul to the Kingdom of Cambodia in Ontario, administering special projects and public relations. Since the reinstatement of her role, Nicole has received delegations from Cambodia and the Philippines, bridging the unification of the ASEAN countries in Canada, promoting cross-cultural understanding and mutual support. She is also involved in organizing community events, international business opportunities, hosting foreign missions, Cambodian New Year parliamentary reception at the Ontario Legislature, the Asian Heritage Month Parliament Hill Reception and the opening of the Honorary Consulate.

Prior to her current positions, Nicole was a Business Development Manager at a property development company. Her strong commitment, positive work ethic and exceptional client service make her the perfect Client Relations Manager for the company’s clients, partners and business associates. Nicole Leung has acquired her mortgage agent licensed by the Financial Services Commission of Ontario in July 2014, she has gained knowledge in a full range of unique financial products, including mortgages, syndications, overseas investments, and financial planning, her personal investment philosophies have successfully helped local and foreign clients grow their investments and achieve their financial goals.

In November 2015, Nicole was an active participant in the 14-day Markham-China Trade Mission led by his Worship Mayor Frank Scarpitti, Markham Council, Economic Development Department and the Confederation of Greater Toronto Chinese Business Association, along with entrepreneurs, business owners, organizations and communities leaders. The delegation visited major industrial and economic zones in China, such as Beijing, Shanghai, Tianjin, Wuhan, Huadu and Hong Kong. The mission further strengthened and promoted economic, business and cultural relationships between Canada and China. The experience has deepened her insights of China and its cultural differences between cities.
Nicole Leung is actively involved in many social, community and charitable activities in Canada and devotes herself to the development of the Asian-Canadian community. She is a founding director in the Cambodian Canadian Arts and Cultural Association (CCACC), Corporate Secretary in the Federation of Transoceanic Chinese Canadian Association (FTCCA) and the Federation of Asian Canadians Toronto (FACT). She is also involved in Lobster Fest, National Pasta Month, National Soup Month, Diversity Job Fair and Multicultural Film Festival.

Nicole Leung was born in Hong Kong and immigrated to Canada in August 2002. Her mother was born in Vietnam and fled the country with her entire family, with 12 siblings and her grandmother to Hong Kong in 1977. Her mother worked at the United Nations refugee camp in Hong Kong and with the Police as an interpreter, reading, writing and communicating fluently in Vietnamese, Cantonese and Mandarin. Her mother’s family started a small family luggage business in Hong Kong as they tried to make a living and support the whole family. Nicole has learned at a very young age that she needs to work very hard to be successful. She started working at a young age at 16, a year after she arrived in Canada, to support her family and education when her mother fell very ill. She continued working throughout her school years and graduated from the University of Toronto in 2013 with an Honours Bachelor of Science degree majoring in Biology and Anthropology, she was the first in her family to obtain a university degree.

With over 30 years of invaluable management experience in the financial industry, Ivan has developed tremendous expertise in a wide range of disciplines, including Finance, Marketing, Investment, Global Risk Management, and Internal Audit. Through his volunteer works at academic, charitable institutions and Parks & Recreation, Ivan has established excellent networks connecting to business leaders, scientists, scholars, and politicians. He has held significant positions to lead and chair task force teams, board committees, fundraising and entertaining events for the community. His Career Objective is to design, develop and implement high value-added strategies to optimize business performance while overseeing the effective use of resources and facilities.

Melvin Mariathas is Tamil Canadian, He is currently working with the Ontario government for the past 16 years as Application Tester. He is involved in many community organizations.He lives in Scarborough and contributes towards the community.